Fighting in our language gives us strength. Our identity is our weapon. 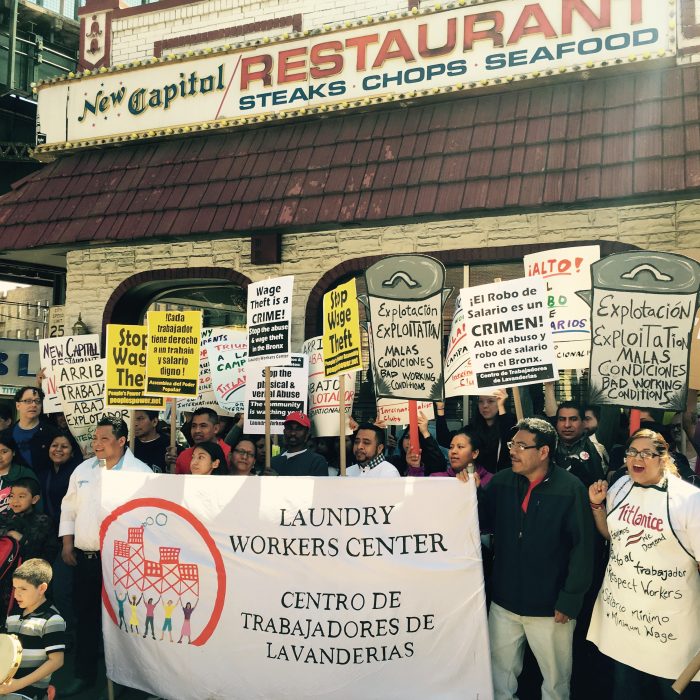 Inspired by LWC’s 2015 win at Liberato Restaurant, located in the same neighborhood as New Capitol, workers decided to fight back. They became members of Laundry Workers Center and trained with us for six months, calling their campaign “Titanice”, which in the indigenous Nahuatl language means “we will win”.

“Fighting in our language gives us strength. Our identity is our weapon,” said Oscar Ramirez, one of the leaders of the Titlanice campaign. “It is a call to free ourselves from labor exploitation and discrimination.” A number of the workers are indigenous from Mexico, and speak Nahuatl and Mixtec, another indigenous language.

Many of the workers demanding change at New Capitol were hired as dishwashers, but also cleaned the restaurant, prepped the food, and did deliveries. They put in as many as 72 hours a week and were not paid minimum wage. They also faced dangerous safety conditions, including broken, slippery floors, and unsafe stairs.

On April 23 2016, New Capitol workers publicly launched their campaign, gathering with over 100 members of the community to demand respect, dignity and justice at New Capitol Restaurant.

“We are tired of these abuses and the exploitation of immigrants,” said New Capital worker Teofilo Ríos. “I’ve been waiting for this for years.”

The following week, New Capitol management agreed to talks with the workers and LWC, with NYS Senator Gustavo Rivera as mediator.

A month after going public with their campaign, our members at New Capitol won their first victory—workers are now paid minimum wage and overtime, with a reduced work schedule, proper safety measures, a time clock with recorded pay stubs, and more.

The workers of the Titlanice campaign continue to negotiate for back wages. Stay tuned!