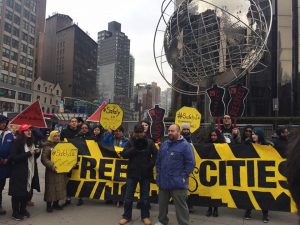 Throughout Trump’s campaign, he has sown divisions through his sexist, xenophobic, and racist rhetoric and campaign promises that threaten the safety and freedom of WCF members’ communities. In response to this multi-level attack, the WCF announces the Freedom Cities campaign with a six-point platform: Workers’ Rights, Safety Beyond Policing, Hate Free Zones, Community Control, Invest in Humanity, and Political Power.

“A Freedom City goes beyond the idea of a sanctuary city,” said Anshu Khadka, a community organizer at member organization Desis Rising Up & Moving (DRUM). “We want freedom for all of us: workers, all immigrants—documented or undocumented, people with criminal convictions, LGBTQ and GNC people, and all people of color. As we rise up and move forward, we know that none of us are free until all of us are free.”

In contrast to the imposed vision of safety as policing, borders, deportations, and incarceration, Freedom Cities declare that safety is equal access to decent work, education, affordable housing, and healthcare. Through this campaign, people of color, immigrants, workers, women, Muslims, LGBTQ people, and youth are reimagining safety and belonging on their own terms, building power from the bottom up. The Freedom Cities platform recognizes that dismantling the web of deportations, attacks, and racialized policing and incarceration requires confronting the deep roots of criminalization and marginalization that have long enabled it.

“People look at us and we all look different, but when they listen, we have the same sound—we share the same battle,” said Janika Reyes, a member of Retail Action Project who is participating in the WCF’s Delfino Leadership Institute. “When I look around the room during a Delfino training, I see the faces of so many generations; I hear all of us leaders shouting ‘Unity is power!’ and I feel ready, I feel brave.” 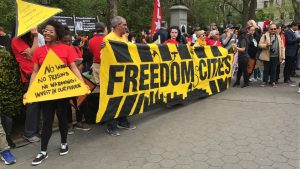 The New York Worker Center Federation is an autonomous multiracial movement of workers and immigrants organizing across sectors and issues to build the power of the people whose labor fuels this city. Through Freedom Cities, the WCF aims to center directly impacted communities in the fight against the Trump administration, leading the movement to create safe communities where everyone can thrive.